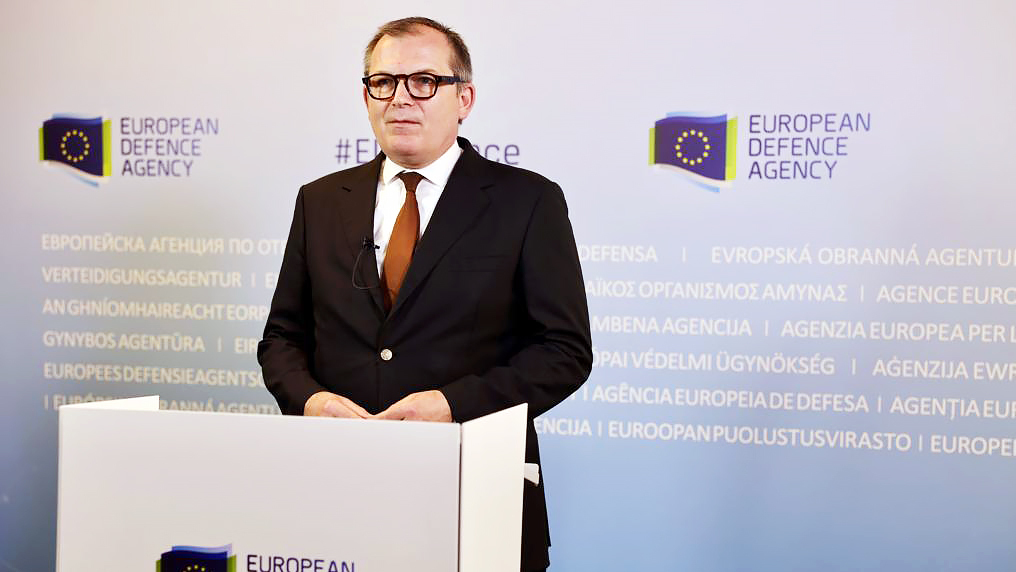 Read Article
At a high-level online conference co-hosted today by the European Defence Agency and the Portuguese Ministry of Defence (under the auspices of the current Portuguese EU Presidency), senior representatives from Ministries of Defence, defence research centres, industry, European institutions as well as NATO discussed existing and future challenges and opportunities related to emerging disruptive technologies in defence.
Emerging disruptive technologies (EDTs) such as artificial intelligence, big data, quantum technology, robotics, autonomous systems, new advanced materials, blockchain, hypersonic weapons systems and biotechnologies applied to human enhancements - to name only them - are expected to have a disruptive impact on defence and revolutionise future military capabilities, strategy and operations. The conference provided a comprehensive overview of EDA’s role in European defence research and stressed the need for Member States and the EU to sustain and further increase investment in innovative and disruptive technologies to support state-of-the-art defence capabilities.
The event was opened by the Portuguese Minister of Defence, João Gomes Cravinho (speaking from Porto) and EDA Chief Executive Jiří Šedivý.
In his speech, Minister Cravinho stressed the need for cooperation and synergies between civil and military actors in order to get the most out of new emerging technologies for defence. “When it comes to EDTs, we need to stimulate synergies between NATO, the European Commission and EDA, taking advantage of civil-military cooperation and the dual-use nature of technological development”, he stated.
EDA Chief Executive Šedivý said in his speech that the EU’s strategic and political defence ambitions can only be credible if they are underpinned by technology and innovation. “For the EU to be a credible security provider and a trusted partner in defence, we must focus our efforts on the development and mastering of technologies that have a serious potential to revolutionise our military capabilities, strategies and operations. Emerging Disruptive Technologies, such as Artificial Intelligence, quantum technologies or hypersonic weapons and new space technologies, must be in the centre of our capability development”, he stated.

Disruptive technologies for disruptive capabilities
The opening part was followed by several keynote speeches.
Focusing on the disruptive potential of technologies at the interface between security, defence and space, Stephen Quest (European Commission Director at the General Joint Research Centre) said the strategic importance of cross-fertilisation between civil-military industries was behind the Action Plan the European Commission has presented last February to enhance synergies and cross-fertilisation between civil, defence and space industries. The Action Plan covers three priorities, Mr Quest said. “First, to build new synergies among EU programmes and instruments so that disruptive technologies can find concrete uses across civil, defence and space industries. Secondly, to enable that defence and space technologies find concrete civil applications, the so-called ‘spin-offs’. And thirdly, to facilitate the use of civil research and innovations into new European defence projects, the so-called ‘spin-ins’”. The Commission will present by October a roadmap on key technologies for security and defence including options for (a) boosting research, development and innovation and (b) reducing strategic dependencies in critical technologies and value chains, he said.
General André Lanata, NATO’s Supreme Allied Commander, said EDTs were technologies whose practical uses have the potential to fundamentally change the way military forces operate. If we are serious about seizing the opportunities of EDTs, we need to fundamentally change the way we operate and think. We need resources and above all a cultural revolution, he stated.  Innovation and EDTs offer a wide range of opportunities for fruitful boosts to EU-NATO cooperation, he added.
Petter Bedoire (Chief Technology Officer, Saab Group) referred to the need to make sure the new technologies developed will create opportunities rather than threats. There is also the challenge of finding a balance between the possibilities enabled by disruptive technologies and the defence capabilities actually required by the Armed Forces, he said.

Other News in Foreign Affairs

Russia: Declaration by the High Representative on behalf of the European Union on the ruling to label Alexei Navalny’s organisation and his regional offices “extremist groups”

EU, its member states, US, UK, Japan and Switzerland call on Belarusian authorities to respond to people’s demands and not to interfere with the work of diplomats

“I used to be very afraid when going to school and was struggling to concentrate on my studies" Chinsisi, 14, is from Malawi, where going to school can be a risk for children with albinism. But he holds #StrengthBeyondAllOdds, he keeps going. #AlbinismDay

From #EUBAM Rafah to the world: 1 image, 10 years of #eudiplomacy. Check the story behind the picture: #EEAS10

Over 5.6 million Venezuelans have left their homes since 2015. Latin American countries continue to host #refugees even though they are under stress due to the #COVID19 pandemic. On 17 June, we have a chance to help them. Stay tuned! #Together4Venezuelans

The Arab Spring is back: in opinion polls. Viewed as positively as back in 2021.

From @EUBAMLibya to the world: 1 image, 10 years of #eudiplomacy. Check the story behind the picture: #EEAS10